Miss Alice Cozens, who died at Galashiels in 1989 (aged 98), treasured throughout her life several letters sent to her by Sir Henry Dundas whilst she was head teacher at Toxside School. Sir Henry’s letters were written during World War I in response to messages and presents sent to him and his troops by the Toxside pupils.

Alice Cozens was just twenty when she took charge at Toxside in 1911. The school had been built in 1848 for the children from the scattered farms at the foot of the Moorfoot Hills in the southern part of Temple Parish. There was a single schoolroom on the ground floor with living accommodation for the schoolteacher above. There was no teaching help of any kind and no janitor. Some of the boys took turns to set the fire and clean the school for 6d. a week.

The school roll fluctuated between 20 and 35 pupils (aged between five and fourteen). It was common, then, for farmworkers to move jobs every year and the customary time to do this was at the end of May (the ‘May Term’) when as many as ten pupils might leave. The high turnover of pupils must have made Miss Cozen’s lonely and difficult job more exacting. Children 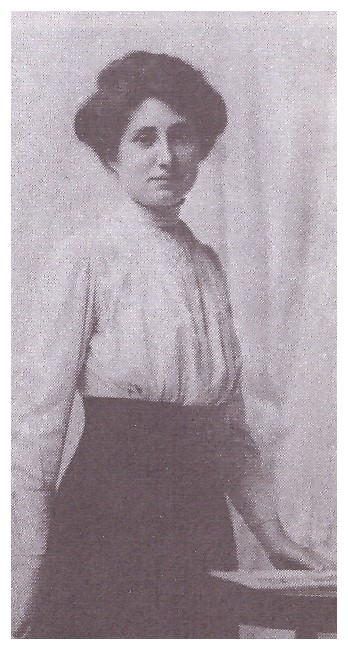 were often kept from school to help with farm work (e.g. lifting potatoes, clipping sheep, harvest work and threshing) or helping at home if there was an illness or their mothers were called on to do farm work.

The weather at Toxside can be very bleak (described by one inhabitant as ‘nine month’s o; winter and three months o’ damned bad weather!’). There were sometimes heavy snowfalls as early as October. Miss Cozen’s entry in the school log book on November 30, 1917 read:

1/4 past 2pm with an interval of 20 minutes for lunch. Even then it is dark by the time many of the little ones reach home.

deep for the to fight through.

Heavy colds were common and there were occasions when the school had to be closed for up to a month due to an outbreak of flu or whooping cough. Despite all these obstacles, however, Miss Cozens was a very effective teacher and she received this excellent report from the inspector in May 1913:

The results in this school show that much hard and successful work has been put into the instruction. The pupils exhibit an excellent attention to their lessons and the tone is all that could be desired. Reading and recitation are done with marked expression. Spelling is accurate and frequent dictation exercises show good form and adequate supervision. Jotter work is particularly neat and well supervised. Very successful work is done in crayon drawing.

Toxside School was not managed by the Temple School Board but by the Heritors (major land owners) of the Parish. The following letter was sent by Mr. Low, clerk to the Heritors,¹ 3rd July 1914:

Dear Miss Cozens, I have much pleasure of informing you that the Heritors at their meeting agreed to increase your salary by £15 per annum; and I was also instructed to say that they are much pleased at the excellent Report of H.M.I. and the manner in which you carry on the work of the school.

P.S. I forgot to speak about the history books but just get them.

This brought Miss Cozen’s salary to £105 per year. Some of the Heritors visited the school regularly – particularly Lord Roseberry who dropped in at least once a month (bringing with him, always, a box of rock for the children), and the Dundas family.

Attendance has been good this week. Lady (Evelyn) Dundas and daughter visited the school on Tuesday. they heard the children read, sing, recite, do some mental arithmetic and then presented them with quite a number of beautiful book prizes. On Friday her Ladyship watched the children at their games in the playground and Miss Mary presented them with sweets. Average attendance 21.2.

Sir Henry Dundas visited the school on Firday and said a few kindly words to the Children.

1/2 holiday and treat given to the children on Friday of the week by Sir Henry Dundas.²

Gifts for the Troops

World War I began not long after, and in the autumn the children began knitting mittens, etc. to send to the soldiers.

All the children, boys as well as girls, are knitting cuffs – scarves – gloves for the soldiers every Friday afternoon.

This week a box of articles knitted by the children has been sent off to the soldiers at the front.

Every article containing tobacco, soap, cigarettes, etc. with a little note from the knitter in each.

The parcels got through to Sir Henry’s regiment in Belgium remarkably quickly and the following replies (marked ‘Passed by Censor No. 607’) were received in November, 1914:

Dear Madam, Would you kindly read the enclosed tot he children at Toxside School. It was so very kind of them to think of me and to send me these nice mittens and picture of Arniston. I often think of the happy days I have spent with my wife and family amongst them all and look forward if spared to renew the same.

Dear Girls and Boys, I have just received (6.0pm) your parcel of woolen mittens and picture of Arniston – it was a great surprise to me to receive them and I thank you all very much indeed for having made them and for your kind thoughts about me.

The weather has been very cold lately, snow and rain alternately, your mittens will keep my hands warm and I will wear them at once. Last night I slept on the top of a potato heap covered over with straw in a cow byre. There were no cows in the byre but a lot of us slept close together which keeps one warm. Potato heaps do not make a bad bed until they begin to tumble off the heap and one begins to feel oneself falling off one’s bed.

The farm near where we are staying is crowded with Belgian refugees – fathers, mothers and many little children. Yesterday, however many of them had to leave because it was dangerous to stay here on account of the shells which were dropping about the place.

It is sad to see all the cottages blown to pieces also churches, schools houses and other buildings – all the beasts are killed for the soldiers to eat and also hay, straw and oats have been taken for our horses so there is nothing in the country at all now. Wishing you all a happy Christmas and New Year.

More parcels were sent from Toxside School in 1915 and this letter was received in reply during the February of that year:

Dear Madam, Would you kindly thank all the school children from me for their kind little thoughts and for all the trouble they have taken ins ending out letters and little gifts to the troopers of the 1st LifeGuards – all the parcels were opened yesterday and made ready to give out to the various soldiers.

I was asked to read Bruce’s letter as his little parcel was opened before being given to the lucky recipient – I am therefore writing to him myself. All the other parcels were left intact for soldiers to open themselves. I am afraid there has been a slight delay in acknowledging receipt which may have been a matter of disappointment to the children but my regiment has had a spell of being in the trenches near Ypres in Belgium and we have just returned to our rest camp close to the French frontier.

I am sending a few picture postcards of Ypres which may possible be of interest. With best wishes to all the school children and yourself.

As ‘Peace’ was signed last Saturday a holiday was given to the schools on Friday, 4th July.

This was the last letter in her collection:

Dear Miss Cozens, I must write a line to tell you how very much I regret your departure – I am very sorry for the children – you will be very much missed by everyone. I hear the residents are getting up a testimonial to you and have much pleasure in sending you a small subscription towards it.

I hoped so much to have been back by the 19th but now that peace celebration are fixed for that day I’m afraid Miss May will want to stay here a little longer – she is enjoying herself but the weather is very bad now – so cold again – with many regrets – kind regards from Miss May.

Toxside school remained open until Easter 1956 when the fifteen pupils were transferred to Temple School. Mrs. Forsyth, the last head teacher, remembers her time there as being very happy – despite it being so cold that winter that the gas cylinder froze. The building has since fallen into private residential ownership.

Henry Dundas was born in 1866, the youngest child and second son of Robert and Emily Dundas. He was a charming man but soft-hearted and easily taken in – readily lending money to various people who had no intention of repaying. He took up polo, a very costly pastime, and he gambled freely, to the extent that he ran into substantial debt. His father bailed him out with the warning that, if it happened again, Henry would lose his right to succeed to Arniston in the event of his elder brother Robert’s death.

It did happen again. Sir Robert paid of his second debt and created a Trust naming Robert’s wife, Evelyn, as the main beneficiary, to be succeeded by their only daughter, May. Sir Robert died in 1909 and was succeeded by his son, Robert, who became the 2nd baronet and owner of Arniston. Sadly, Robert lived only a year longer. Henry became the 3rd Baronet but Evelyn inherited Arniston.

Sir Henry and his wife Beatrix lived mainly at Polton House (which he owned) and very seldom visited Arniston. He had business interests in South Africa and, during a voyage there in 1930, he died suddenly and was buried at sea.

The letters to Miss Cozens and the Toxside children indicate that Sir Henry had a touching warmth and compassion as well as a rare understanding of children. It is also clear that Miss Cozens was a remarkable woman and an unusually talented teacher.