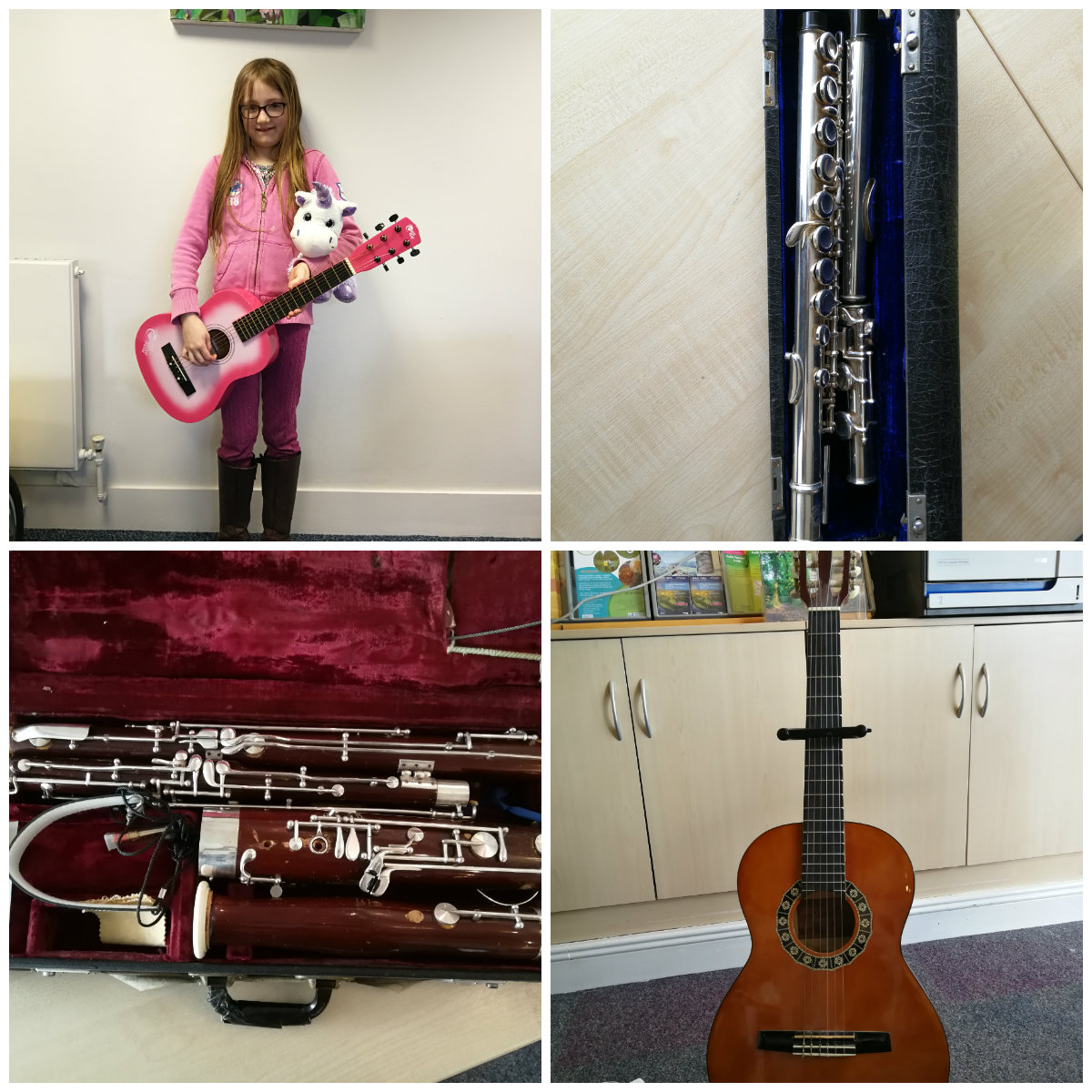 During the week of the 12th-18th March we were delighted to take part in Zero Waste Scotland #Passiton week. A campaign that support the public to take part in reuse, sharing, swapping and upcycling events across the country.

This year their campaign focus was an Musical Instrument Amnesty

By the end of the week 4 instruments had been donated to the office.
There were heartfelt and fond farewells as they went off to their new but yet unknown homes.
A bright pink guitar was rehomed with Mary, who told us all about her love of music and how she is in a band with her friends,  who now all have pink guitars! We’re very excited that one day perhaps they might do a wee performance for us at a Greening Gorebridge event!

We had another guitar, guitar stand and music stand donated which was a beloved possession of the daughter of one of our own Trust staff, Jane Burridge.

And 2 fabulous wind instruments were donated by a local lady.

An oboe and a flute!

We are currently looking for home for these instruments and we pla t get in touch with one of the local schools to see if they could make use of them.

Thanks to everyone who donated these lovely instruments,  we will post an update when we have one about where they have found a loving new home.

We took our second-hand uniforms along to the re-cycle sale at Gorebridge Parish church on Tuesday. It was wonderful to find homes for two boxes worth of uniforms and it was also a great opportunity to engage with members of the community and promote our project and upcoming events. We also collected a box of uniforms that had been donated over the last few months. We have now agreed to attend the re-cycle sale on the first Tuesday of every month!

Biodiversity Day was a very successful collaboration between Gorebridge Wildlife Watch, The Scottish Wildlife Trust, RSPB and Greening Gorebridge. Lots of fun was had by the children (and adults) making seed bombs, bat boxes, bird nesting boxes, orange bird feeders, bird of prey gliders, interactive activities with the RSPB and a fantastic puppet show, which Dr Bunhead and his team created especially for Biodiversity Day. Not only did the story illustrate the importance of recycling but all the puppets were made from recycled materials. The little sponge people were particularly effective. It was a very busy day with 70 children from local schools and nurseries attending as well as 40 community and volunteer participants. After the success of Biodiversity Day, we are very much looking forward to being involved in many more similar collaborative community events in the future. 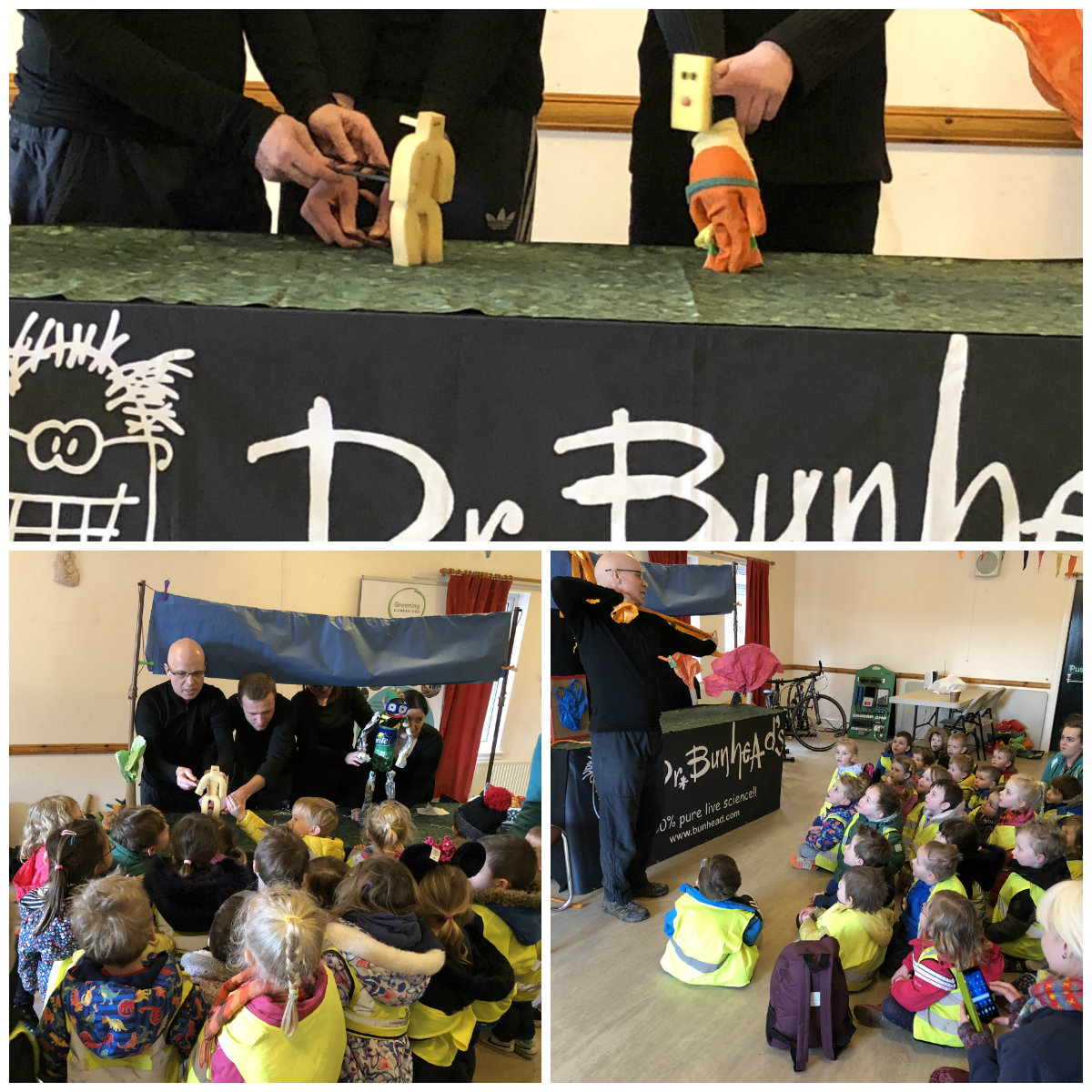 On the evening of Thursday 15th March we had the pleasure of the expertise of Kiki from Newtongrange who delivered a fab workshop on how to make a reusable drawstring vegetable/produce bags.

She cleverly and creatively used upcycled fabric from old shirts and duvet covers to make them.

5 folk came along on the night and had a great time making these stunning and very useful bags ready to go shopping with.

Folk who had been sewers in the past were suitably impressed with our lovely new sewing machines and sewing equipment! 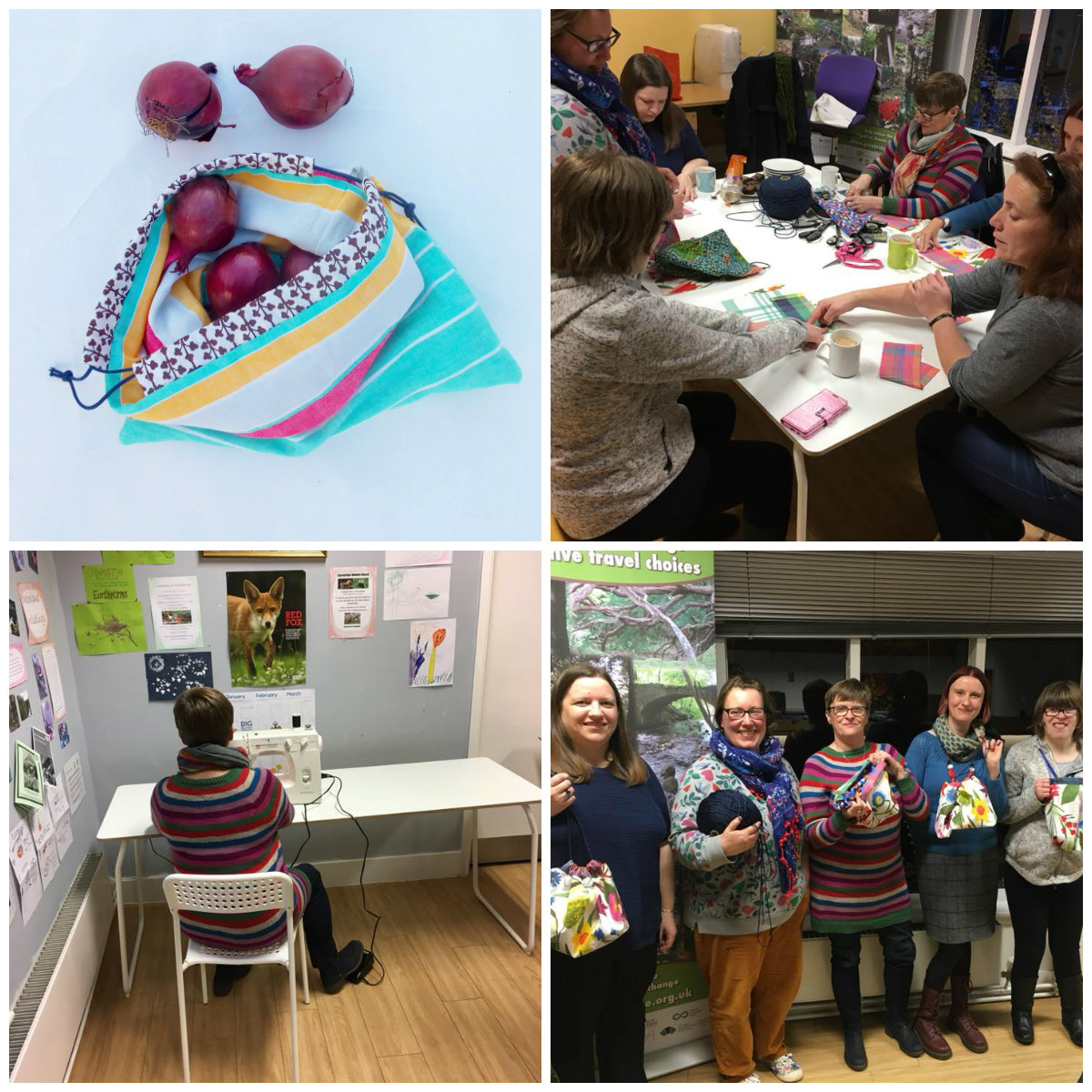 Afternoon tea
In preparation for our eagerly awaited afternoon tea we went shopping to Penicuik Storehouse, keen to source locally made and Scottish food and drinks.
A lovely spread was laid out on the table, so much so we knew the afternoon tea would last all evening as various members of the community storlled along to see what we were up to.

Beeswax food wrap making workshop
Between 4-6pm on the same afternoon we had 15 folks along to make the beeswax food wraps throughout the evening, we had some children joining in too, making them as gifts for their mums.
Suzie from Healthy hampers came along too with some friends, and everyone was really excited about the postive impact of these reusable wraps instead of using wasteful cling film or aluminium foil. 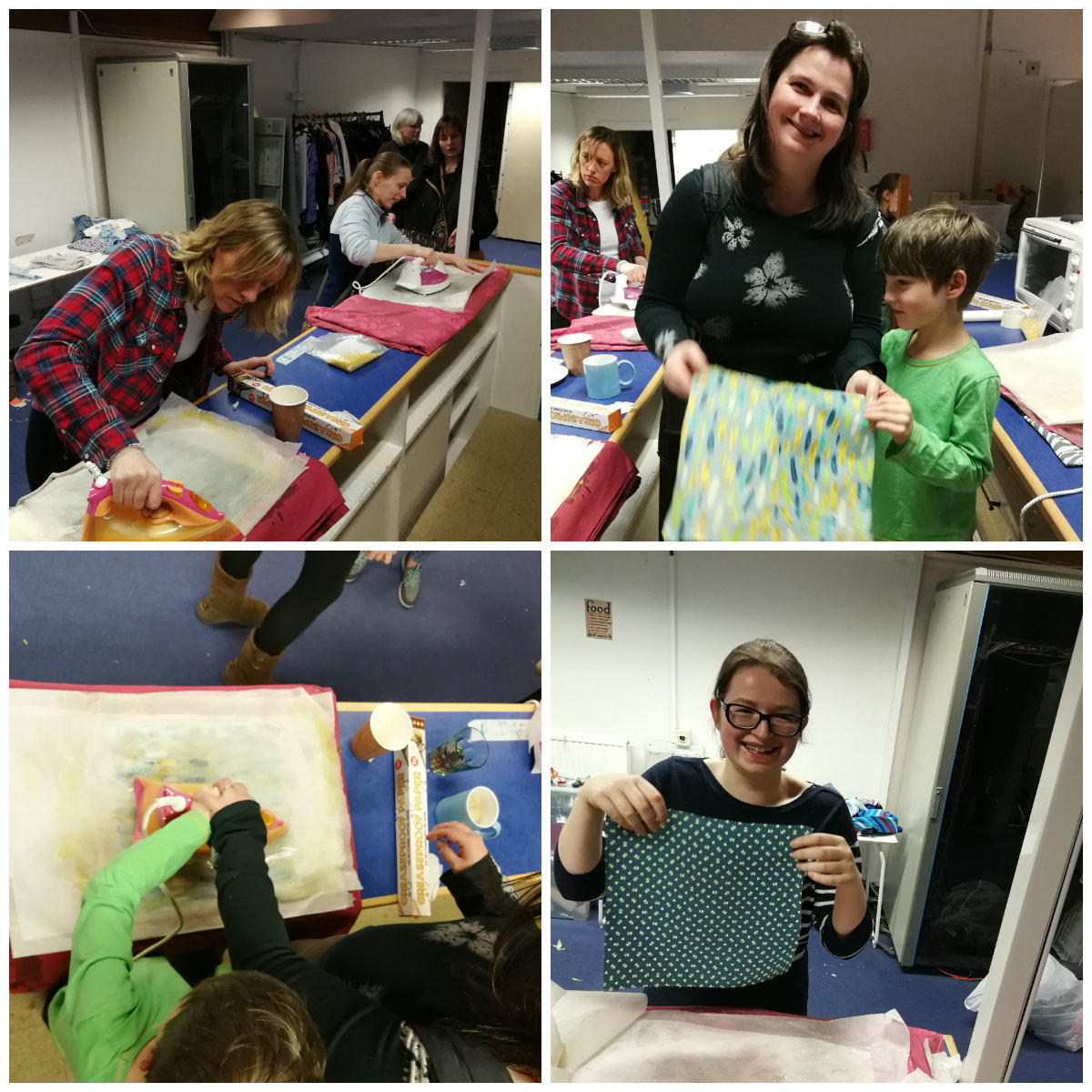 I know I love my beeswax wraps, and we’ve already heard from a couple of the folk that made some on the night telling us how much they LOVE them!

Watch this space, we’ll have more creative upcycling and practical workshops coming up in the next few months and years!

How does cling film use impact on the environment?

Like other non-recyclables, plastic food wrap ends up on landfill at best, and as litter on land and in the sea at worst. On landfill it will sit and possibly leach its chemicals for years, not degrading, and elsewhere it will do the same, whilst also being a risk to wildlife or fish who may get caught up in it or eat it.

After everyone was all beeswax wrapped out we welcomed a few extra folk in for our second Clothes Swap.

There were many bags of clothes donated by 8 people who attended, and lots of fun was had in searching for lovely items that were to make a perfect outfit with other items that people already owned. We swapped 15 lbs of clothes during the evening and many more faces were smiling as they went off with their new finds, eager for the next swap.

We will be going through out remaining clothes on the rails, keeping some of it that can potentially reused and upcycled in our 2018-20 Greening Gorebridge project and the rest will be donated to a local charity shop. 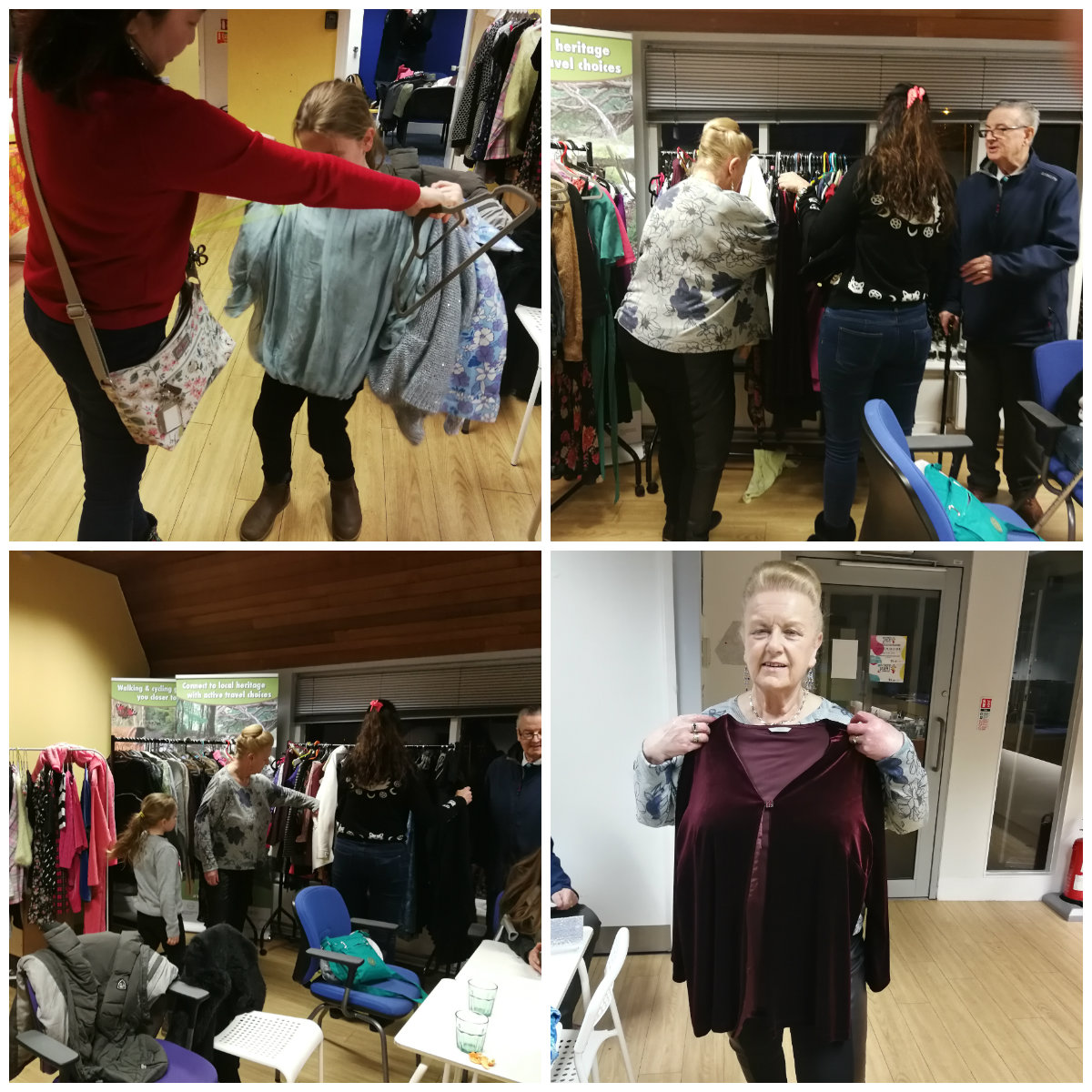 Want to know more about the Greening Gorebridge Project and be kept up to date with our events and workshops?