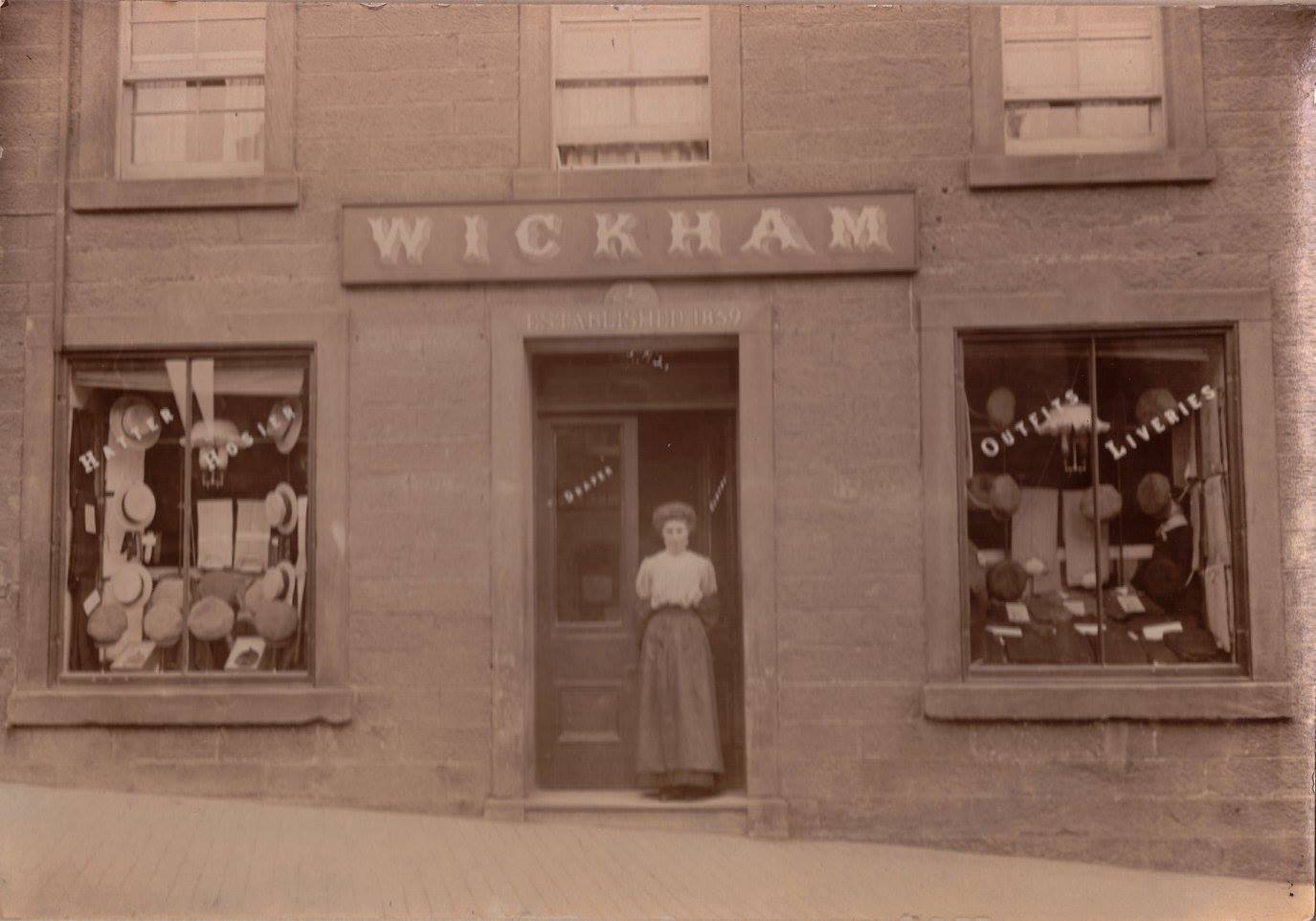 The fading façade of 33 Main Street, Gorebridge, hints at a once burgeoning local enterprise which was a staple of commercial life in the town throughout both the last decades of the 19th, and the early decades of the 20th Century. Lesser known is the story of how this popular and prosperous family was one of many in the town to be wrought by the horrors and harm of the First World War, a war which would plunge the family and town into sorrow.

Wickham’s drapery business, which was active in the village from 1870-1933, is still recognisable from the faded golden lettering above what was formerly the entrance to the premise. Staying at nearby Mullabrach House on Private Road, the family was firmly at the centre of village life; John Wickham was also the postmaster of the neighbouring post office, as his father had been before him. The family were closely involved with other local enterprises, John was a member of the Golf Club, becoming a senior member on its board. The family had also developed a tradition of horse-riding and rearing in the area, and so it comes as no surprise, then, that when the call to arms came both brothers, Thomas and James, would enrol in the Lothians and Border Horse regiment.

James and Thomas were educated at Stobhill Primary School, James then moving on to the Royal High School in Edinburgh where he would become a Prizeman and MacDonald medallist. Afterwards James would receive a preliminary offer from the Civil Service in London, which he would accept but then return North to continue his studies – only then for war to break out.

Unsurprisingly, life at the front was hard for such young men, James, born 1896, was only eighteen when the call came for young men to join the fight, his younger brother Thomas, born in 1900, only sixteen years of age. Stationed in both France and Belgium, James wrote a heartfelt letter home to the drapery for his mother Agnes, yearning for a return home on February 14th, 1916. It read:

‘The hum and roar of the Pullman, very pleasing to the sense, acquires a new significance when “over the border”. Magic words in days of yore when stout Scottish hearts beat in scornful unison in the hatred of the Sassenach, there still remains an exquisite feeling too deep for words when an exile is once again north of the Cheviots.

Up the Liddel and right through the heart of the Southern Uplands is at all times a region of matchless beauty, but to the Scot, with the mud of Flanders still on his boots, and the flat, watery, cheerless pains in his memory, the beauty is trebled.

But the moment comes when in the grey morning the engine labours as she ascends the Gala Water. Every aspect is known, every bend anticipated. Trivial incidents in childhood years are remembered and magnified. There is a hill over which a tramp seemed hard work, and here a tyre puncture made the road a heartless tyrant. But the hill and the road are now mutely sympathetic. The train is over, and the pull becomes a glide, and you know, without looking, that the Fala Hill is surmounted. Objects become still more familiar and dearer. You are going far too fast now. Would the train slacken speed that the enjoyment be prolonged!

Down in the valley in Borthwick Castle, and, round about, the home of kinsfolk. Then follow the Golf Course, where so many happy days were spent and unappreciated, and then the Mill, where every stick and stone on the winding road are known. One wants to grab the unoffending person in the corner and say to him, “That’s ‘Our’ Mill, ‘Our’ village,” and a world of ‘ours’, which up to the present have seemed nothing out of the ordinary.

And now in a short hour, which you know will seem endless, you will be home. The word used thoughtlessly before has now a wealth of meaning, indescribable, unfathomable, unlimited; and now that home is about to take a tangible for after those weary months, there descends a peace of mind which this common case is the most perfect ever experienced.

James would never return home to the valley at Borthwick Castle, or the days at the golf course he felt he sorely under appreciated. Five months this heartfelt reminisces home to his mother he would be killed in action. The Dalkeith Advertiser reported the death a week after as follows:

‘The village has been plunged into mourning by news from the front of the death of Trooper James B Wickham, of the Lothian and Border Horse, on the evening of 17th July. For two months he had been engaged on observation duty, a work entailing much responsibility, and it was while thus engaged that an enemy shell instantaneously killed him … Trooper Wickham was the second son of Mr and Mrs Wickham, Mullabrach … When war broke out his course of study was arrested, but he obtained short leave to prepare himself for the examination for the Civil Service (2nd Division).’

Like over 100 other residents of the village of Gorebridge who gave their lives throughout the horrifying years of 1914-18, James’ name is enshrined on the Stobhill War Memorial. He is buried with headstone at La Laiterie Military Ceremony in Belgium and is further remembered in a memorial at Borthwick Church.

Unlike his brother, Thomas Heyland Wickham would return from the war to the drapery on the Main Street and the family home on Private Road. He would be honoured with both the British Medal and Mercantile Marine Medals – issued to those who had taken part in dangerous voyages during the war. Their mother would cherish the letter received from James shortly before his death, and the enterprise on the Main Street would continue to aid in the thriving economy of a once burgeoning Main Street.